Backer
Beta Tester
#61
My girls have gone into their sort-of-hibernation low activity diapause mode, they are still active but there's not much happening in terms of brood development.

This picture is from early October and gives a perfect impression of how most ants store their brood. It's more of a chaotic mess than the actual nice and clean sorting we see in the game ;D 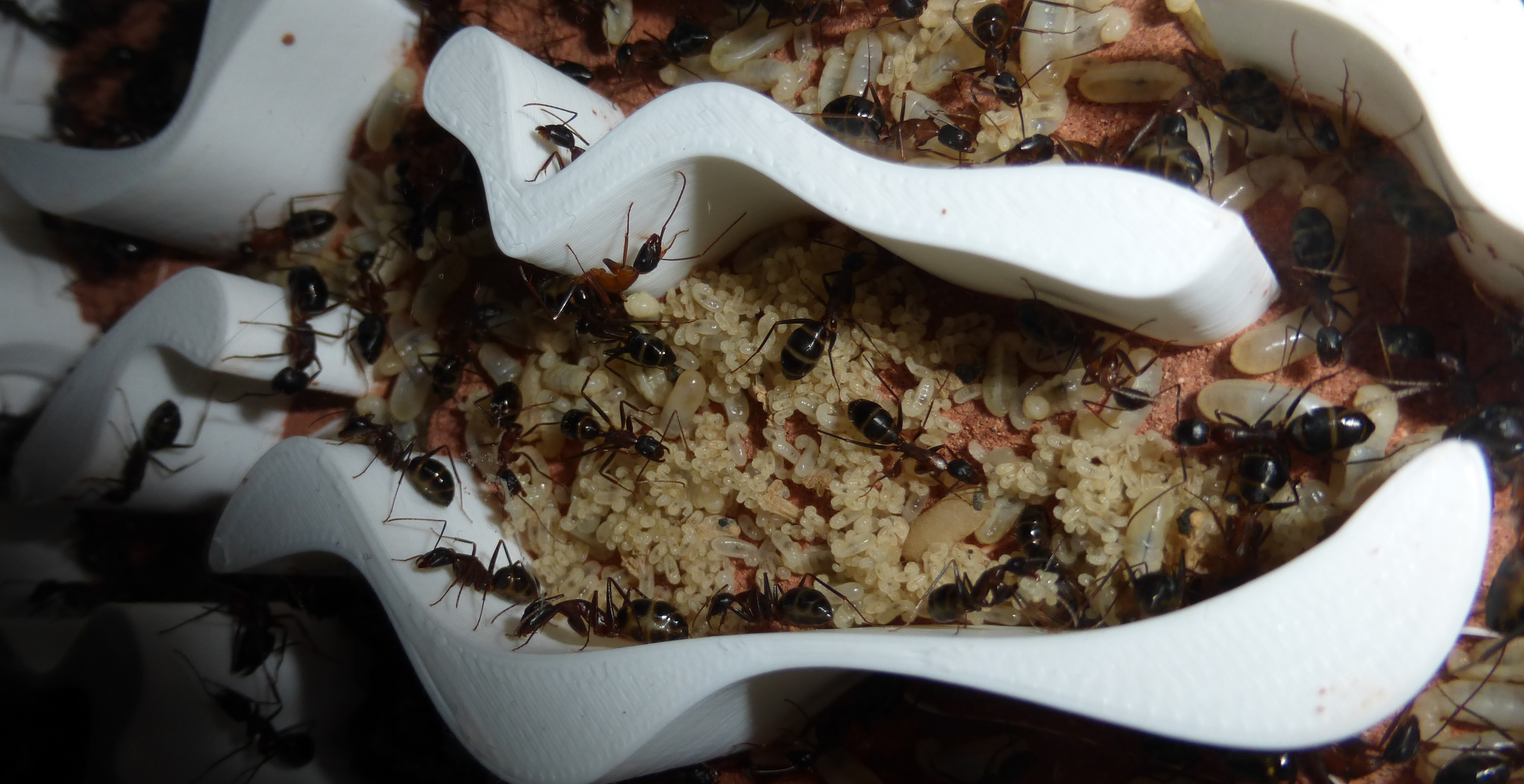 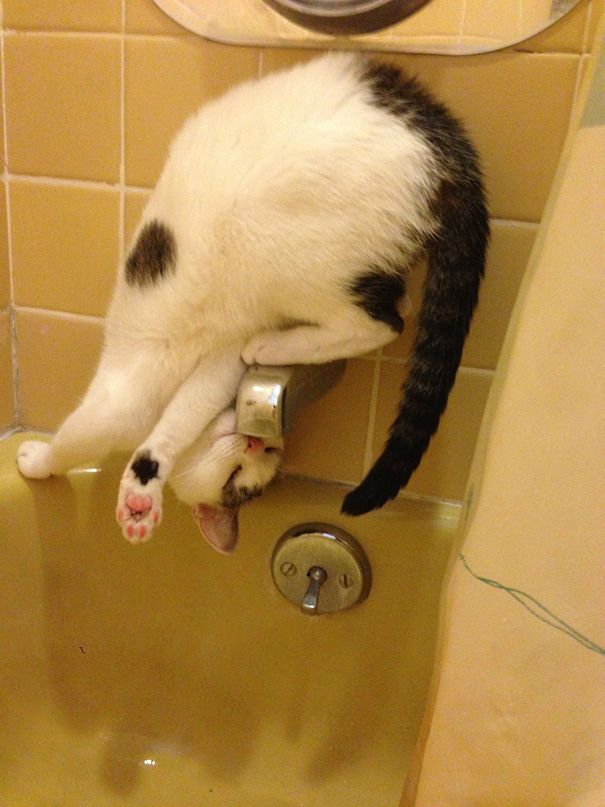 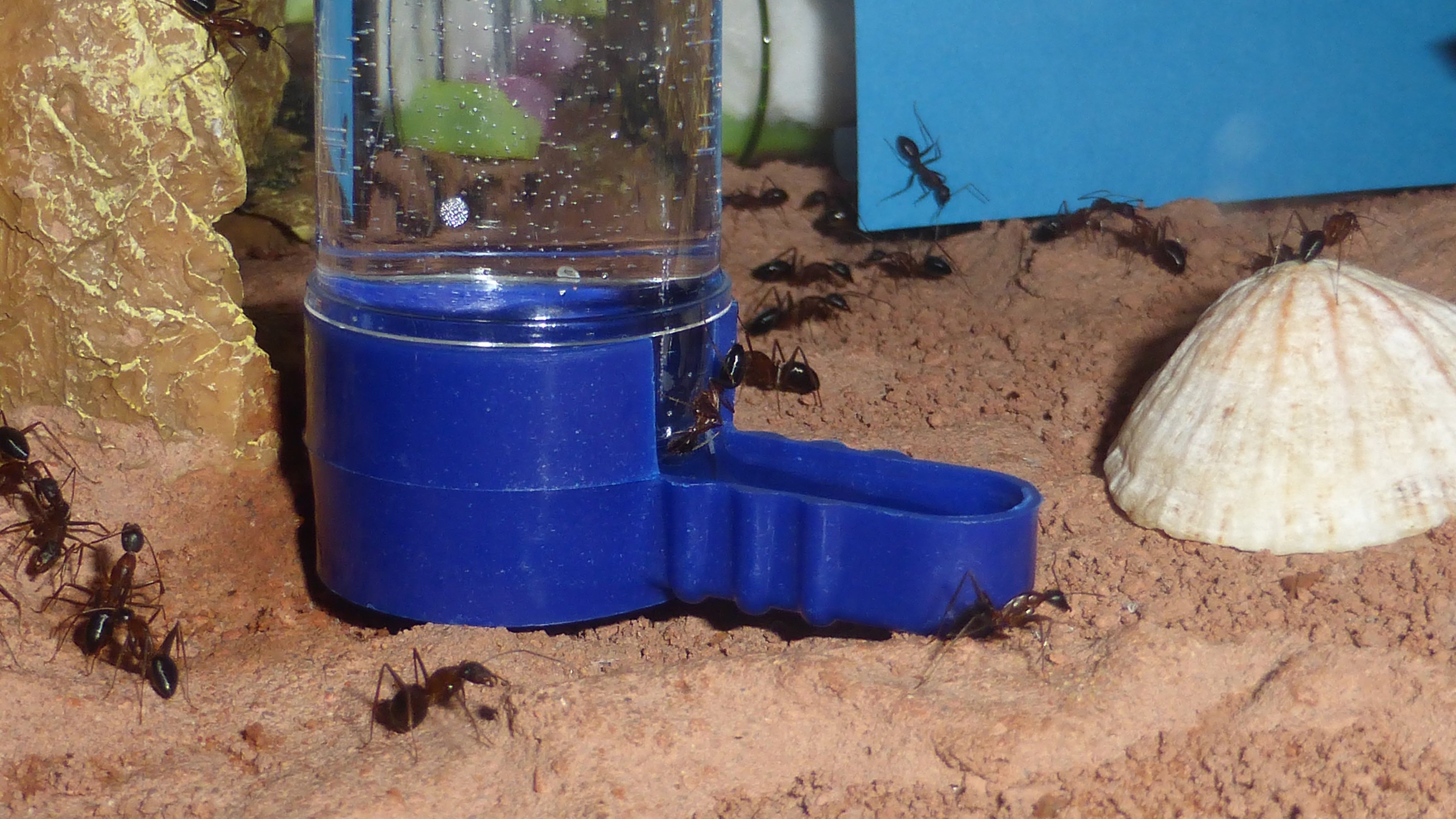 Ants chewing through some waxworms: 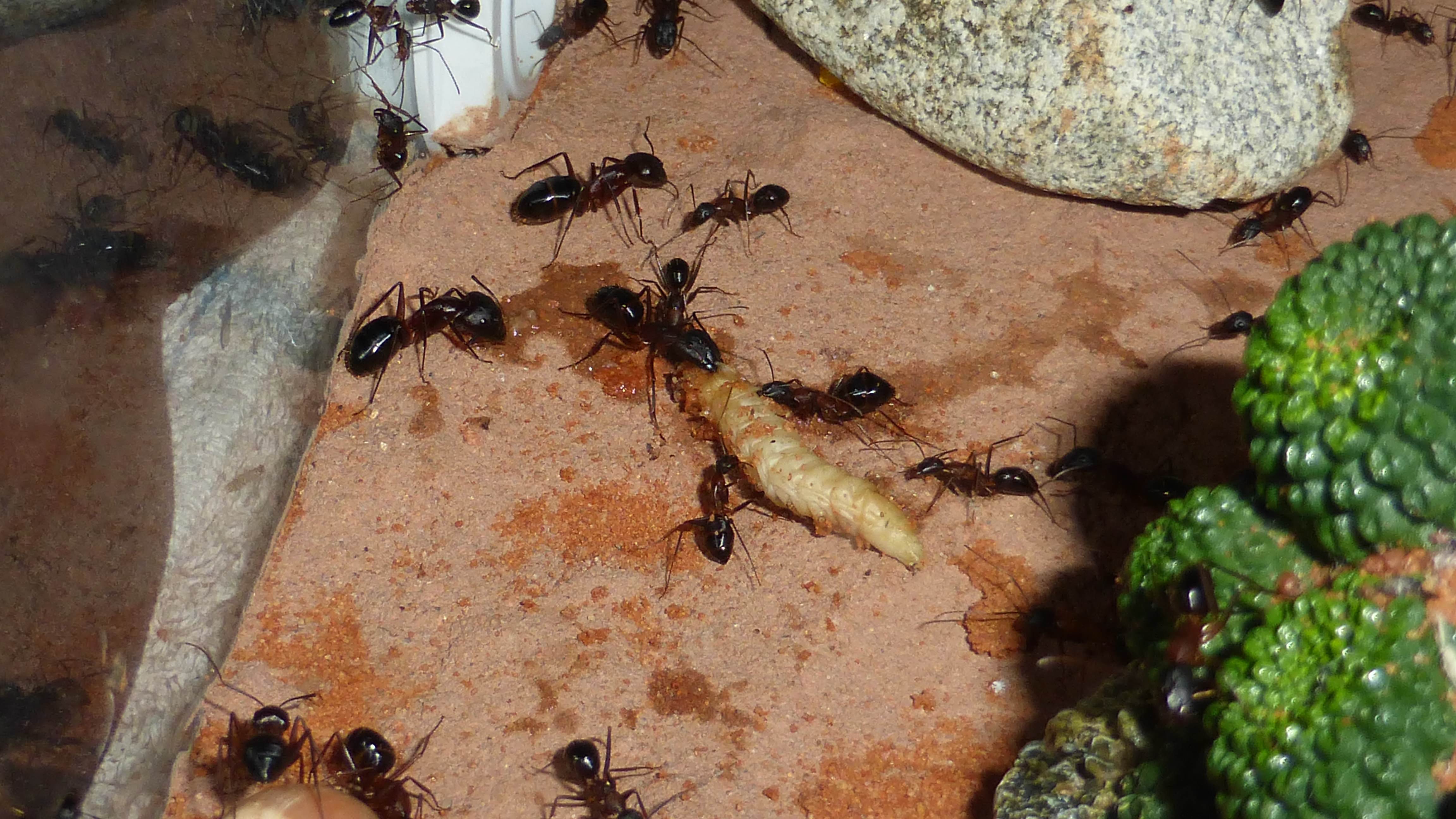 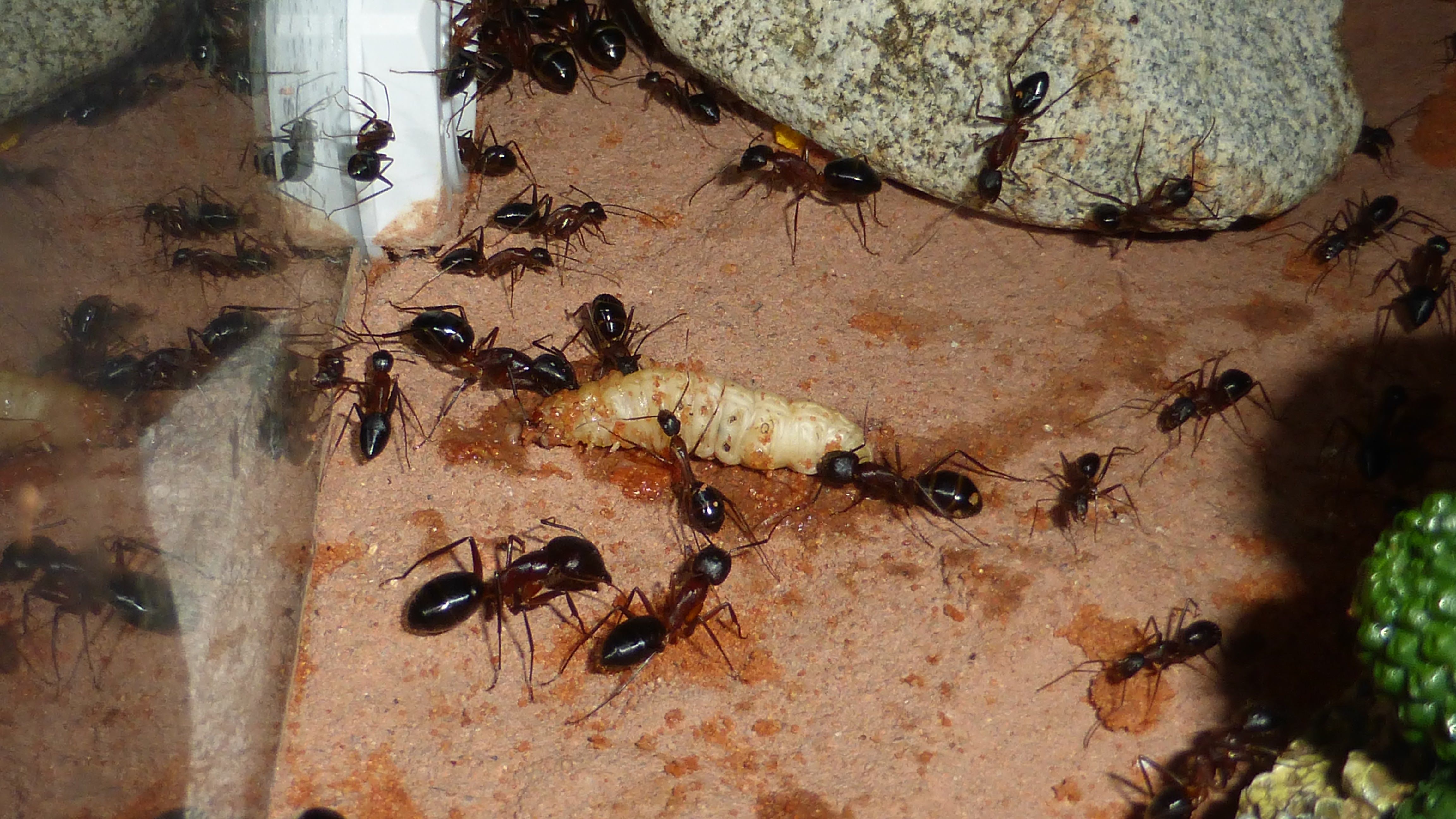 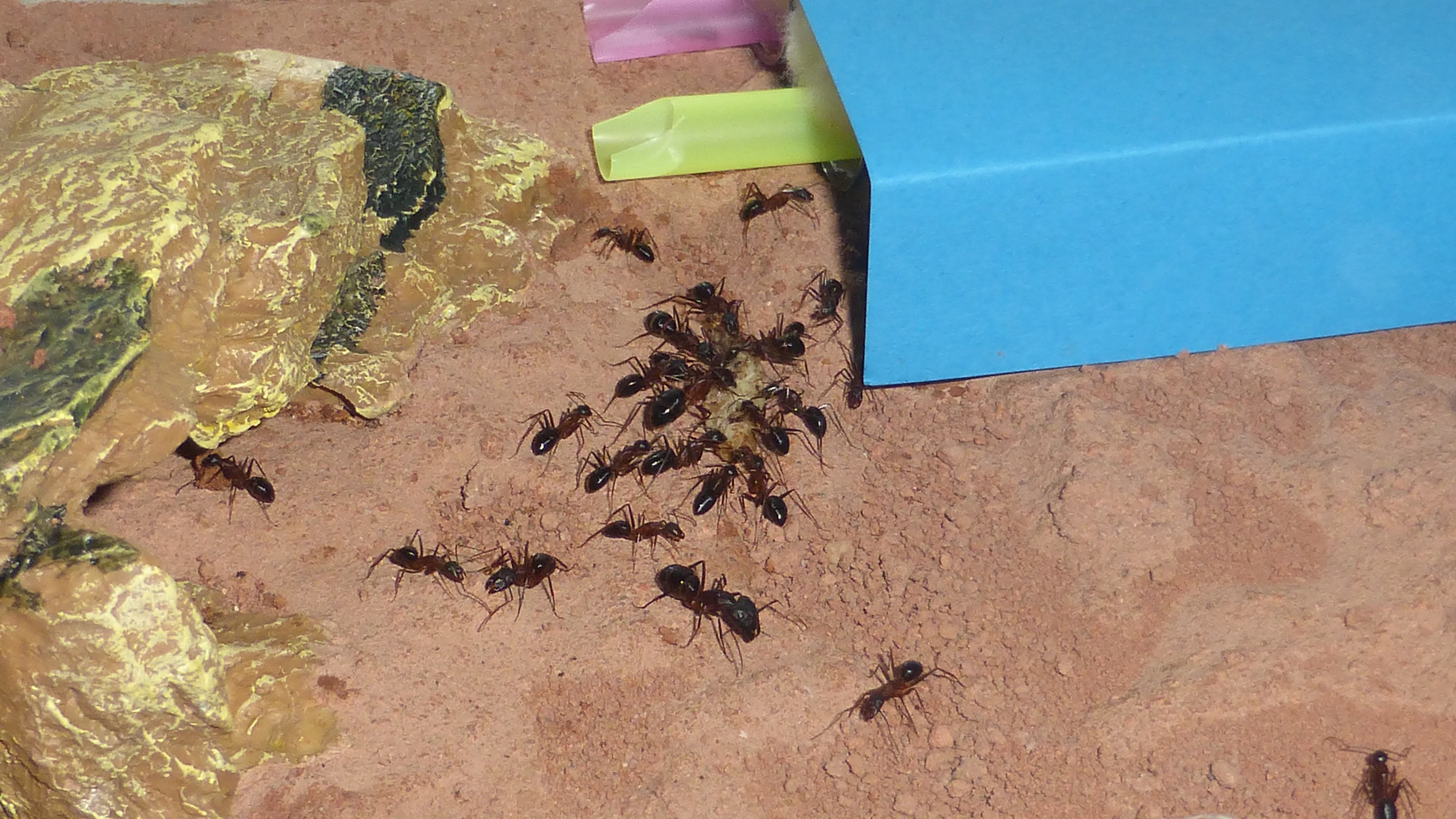 #62
Well my first colony never made it last 4 workers, but you have to admit, I got further than most for a first try. This year, I’m aiming for a pogonomyrmex californicus queen! No one seems to like harvester ants, but air find them fascinating. My next best options will be Camponotus, solenopsis, and pheidole in that order.

Backer
Beta Tester
#63
Getting to 4 workers isn't too bad for the start and maybe you didn't even do anything wrong - sometimes queens just die for no obvious reason.

Pogos are quite excentric ants, I'd recommend to do a bit of research on pages like Formiculture. There's a lot of stuff in which Pogos are quite different from your "normal" ants. Also don't get stung, they really hurt (and they aren't shy to use their stingers when they feel threatened or even just mildly annoyed).

#64
Thanks, this makes me feel better. I think I checked on my queen too much. She was living on what was meant as a water bottle and got exposed to light every week. There were no larvae when I released her. And I only released her because it had been 2 months since her first workers came and she had no brood, and 2 workers drowned in honey. It was foolish to leave the honey in a dish. Anyway, I’ve seen a colony of pogos at my local museum, and I do have to admit, they are weird. The ones there were eating mushrooms and zucchini. They didn’t even have trails, they were just crawling over their whole outworld and the ones who found the food didn’t let the others know. But I really do want ants that store seeds (or any food), it would be cool to see their granaries. Oh, and this year I’ll be equipped with test tubes and some duct tape to prevent light from getting inside them.

#65
Same story here! I have a, what I think to be, a fusca queen now for my second try. She might be unfertilized though. She changes her position a lot.

Backer
Beta Tester
#66
Formica fusca should be hibernating right now (at around 10-15°C).
Ants of the genus Formica do not hibernate with brood (contrary to most other ants that hibernate with larvae) so they stop laying eggs relatively early in the year (usually around late August/early September) because their eggs take around 4 weeks to develop into workers and if they're not done before it gets cold they will die.

She won't lay any eggs until after hibernation, probably she'll have first eggs at around March or April (this is normal behavior for Formica late flyers).

Backer
Beta Tester
#67
Guy Fieri said:
And I only released her because it had been 2 months since her first workers came and she had no brood, and 2 workers drowned in honey. It was foolish to leave the honey in a dish.
Click to expand...
Giving them honey in a dish is fine, the drops should just be really really small (like the size of an ant head). You can use a toothpick to place those tiny drops, young colonies don't really eat much anyway.

Guy Fieri said:
They didn’t even have trails, they were just crawling over their whole outworld and the ones who found the food didn’t let the others know.
Click to expand...
Harvester ants usually form large trails into a general foraging area from where the workers will just leave the trail and individally explore the surrounding territory.
The large trails are formed on the basis of the information the scouts gathered during the morning hours and most of the time don't change much during the day.
Also the ants in the museum were probably overfed, so they didn't really put too much effort into obtaining the food available. I can observe the exact same thing in my Camponotus colony (they sometimes even ignore food when they're full).

Guy Fieri said:
Oh, and this year I’ll be equipped with test tubes and some duct tape to prevent light from getting inside them.
Click to expand...
You can just use a piece of folded paper (colored paper works best), that way you can easily take off the cover and look at the ants without causing vibrations (preferrably dim the lights a bit before lifting the cover). 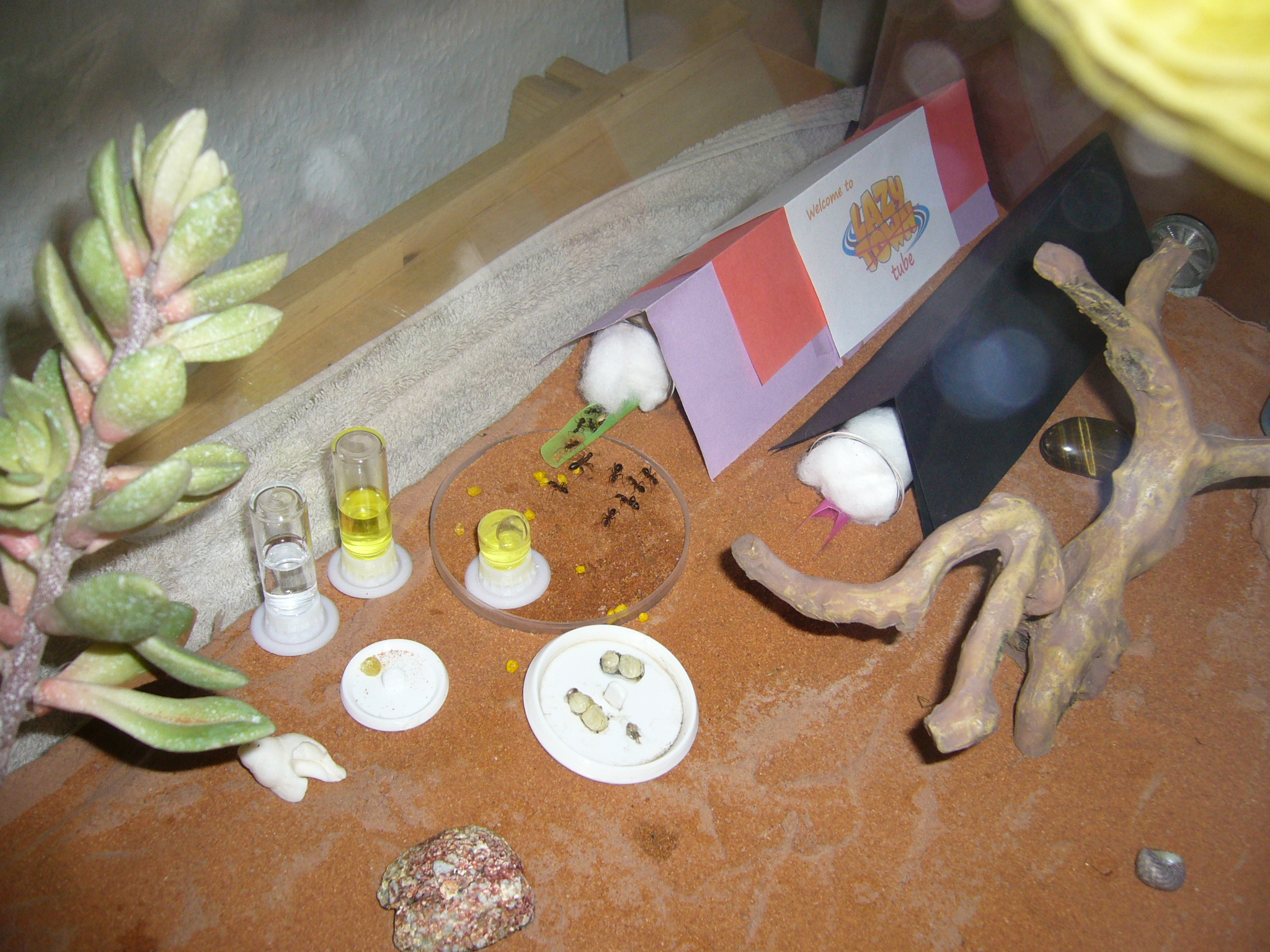 #68
Thanks. Anyway, do you know the best place to find queens? My last one was found between a desert patch and a sports field, but I’m considering going into some chaparral, I’m sure ants would find that a good place to nest.

Here’s my Formicarium, it seems to dry out really quickly though.

Well never mind, I can’t post images for some reason.

Backer
Beta Tester
#69
I'm not really familiar with US species but your idea sounds good to me.
Here's a basic guide on queen hunting from the r/antkeeping reddit wiki: https://www.reddit.com/r/antkeeping/wiki/guides/finding_queens

You can also ask people on the Discord Antkeeping Chat, we have a channel called "anting" that's specifically there to talk about the process of planning, traveling and finding mated queens: https://discord.gg/vSREzpE
Some people even organize group trips to look for queens together.

We do have a lot of US antkeepers, especially from the SoCal area that seems to be the center of US antkeeping activity, as well as regional US state channels (they are invisible by default, you can join them by adding a regional role to your account via the ".role" command in the #bot channel, like ".role california").

#70
Thanks. Anyway, it’s fine. I got an account on formiculture (by the same name) and was able to post images more easily there.

Backer
#71
I currently have about 10-12 Lasius Niger colonies of which I keep 2 for my own. One as a privat farm and one as a public farm which I will show on a livestream. Then I also got a messor barbarus colony and I will move them to a new setup as soon as they are done with hibernation. This will take some time obviously but anyway. I also caught a queen from the tetramorium species but I don't know if she is fertile or not. :C
I will have to see about that. And I also will need to find a way to provide my lasius colonies with bug meat but anyway. I got this game because I had a lot of interest for ants already and this only helped me to keep my own colonies or at least to give me a higher motivation. I even got a microscope with a 800x zoom to show the little fellows in their full glory.

#72
My tube is becoming dry. I am wondering if I could put my queen in the fridge, since she is already hibernating then transfer her into another tube.

#73
I'm personally kinda new to the hobby, I've been ant keeping for about a year now and I found that I'm best at keeping Tetramorium Immigrans (hence the profile picture).

#74
I live in Minnesota so it is very difficult to keep ants, but it has always been my dream to have a colony of at least 50 ants.

#76
Mr queen is starting to lay again now that its getting warmer. Cannot wait to have my first worker!
K

#77
Wow it looks awesome, and according to you seems to perform very well.

Love the stock extension but is it wobbling ? Also, are your darts fishtailing a lot, or is it as accurate as a stock EAT ? And one last question, can you provide a link from Oznerfnerd ? Couldnt find him on ebay.

#78
MikeSlugDisco said:
Man, one of the things I've been blown away by following the development of this game is how it's attracting the REAL ant fans - people who keep colonies in their homes for fun. That's a really humbling thing and I know the guys were a bit humbled by how real enthusiasts were getting excited for their RTS game.